The Man Who Knew the Way to the Moon

The Man Who Knew the Way to the Moon 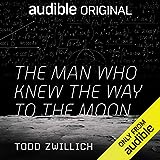 Author: Todd Zwillich
Manufacturer: Audible Original
Reviews / The Man Who Knew the Way to the Moon

The story of John C. Houbolt, an unsung hero of Apollo 11 and the man who showed NASA how to put America on the moon.

Without John C. Houbolt, a mid-level engineer at NASA, Apollo 11 would never have made it to the moon.

Top NASA engineers on the project, including Werner Von Braun, strongly advocated for a single, huge spacecraft to travel to the moon, land, and return to Earth. It's the scenario used in 1950s cartoons and horror movies about traveling to outer space.

Houbolt had another idea: Lunar Orbit Rendezvous. LOR would link two spacecraft in orbit while the crafts were travelling at 3,600 miles an hour around the moon. His plan was ridiculed and considered unthinkable. But this junior engineer was irrepressible. He stood by his concept, fired off memos to executives, and argued that LOR was the only way to success.

For the 50th Anniversary of Apollo 11, hear the untold story of the man who helped fulfill Kennedy's challenge to reach the moon and begin exploring the final frontier.

Certain content that appears on this site comes from Amazon Services LLC. This content is provided ‘as is’ and is subject to change or removal at any time.